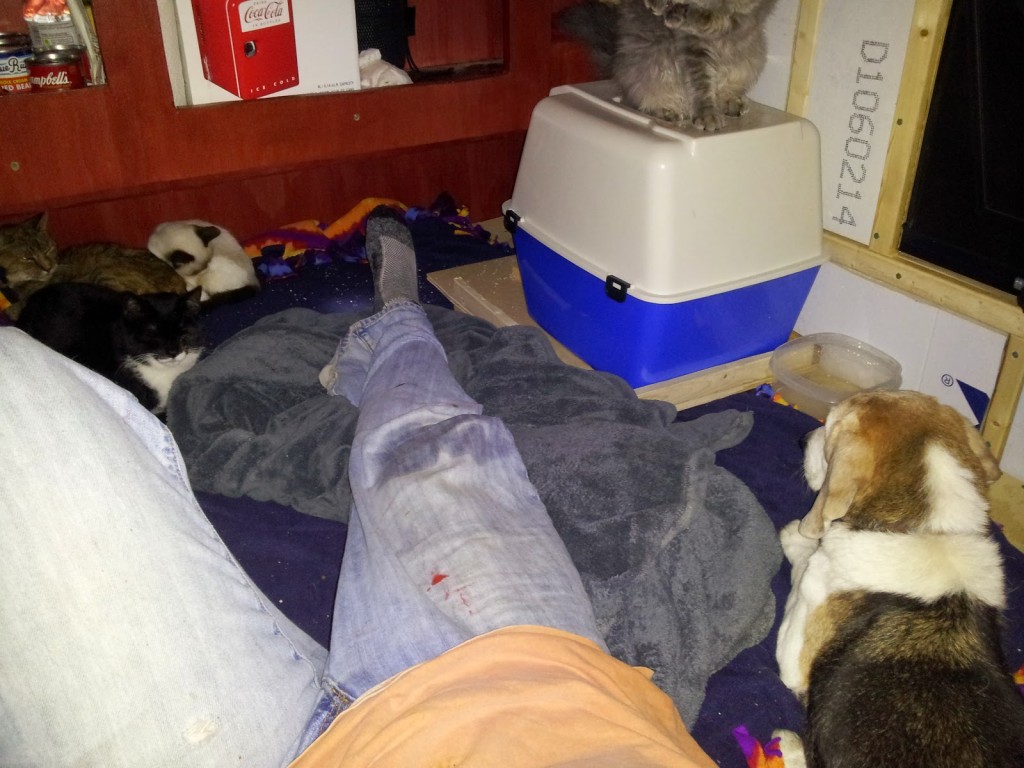 Posted in Sabbatical
After leaving my dad’s around 2pm CT, I drove from Monroe, LA to Jackson, MS via I-20 and I was surprised to not really feel the trailer. (It was there, I checked every 20 seconds.) Very light-weight and slightly less noisy than the trip south-bound. From Jackson, I took the Natchez Trace Parkway north. (I wanted to go south and do the last 100 miles. I’ll do that someday soon though. No time.)
I’ve passed The Trace many times over the years and wanted to bike, hike or drive it. This was my chance as I ultimately did 3/4 of it twice (down and back). The first night I made it to the Jeff Busby campground at milepost 193 around 8pm. (Remember, I can only go 55mph max.) The cats and Amos and I settled in for the night.
The campground was small with only two other sites taken (one very large RV and another spot with people sleeping in a Chevy Blazer). I couldn’t see much but had researched the place pretty well earlier. And really – if someone attacks a camper and finds 4 cats – they’re gonna run!
Amos ate, drank, paced and peed outside while I readied the cabin for our first night. 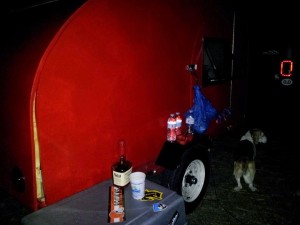 Statler had some tummy troubles (all over Izzy and Simon) so I had to baby wipe bathe the larger cats before letting them loose in the cabin. Tupelo was clean (riding shotgun, not shitgun) but both she and Izzy were a little apprehensive entering the cabin. Eventually, they got comfy. (Sisters!) 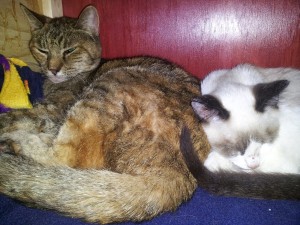 Statler, understandably, had some issues acclimating – mostly spending a few hours in the litter box. Simon – apparently the globetrotter of the bunch just thought it was a giant fun jungle gym and loved it. 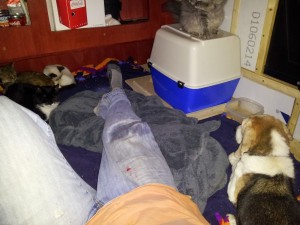 My family portrait, circa 2014 – clockwise from bottom left: me, Statler, Izzy, Tupelo, Simon and Amos. 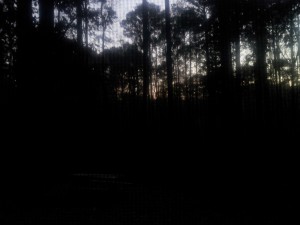 Having not really seen the campground or surrounding area, I was pleasantly surprised by this beautiful view of the pine trees as the sun rose the next morning. 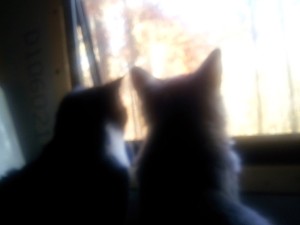 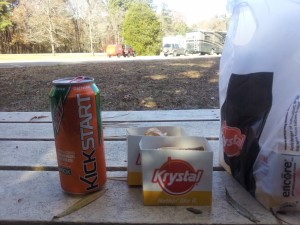 An hour or so north was Tupelo, MS (the kitten’s partial namesake – the other being my favorite Van Morrison song which is [interpretation related to the] Tupelo tree), where I found the most amazing surprise of a Krystal burger not a mile off of the parkway. I got a to-go order and we lunched at the NTNP Visitor’s center.
I also got my first gawker at the Vistor’s Center – a guy in a pickup truck that circled the Jeep/Trailer combo twice while I was loading Amos back inside. Turns out he’s had plans to build a teardrop for 30 years but hasn’t ever “gotten around to it”. I told him he should. 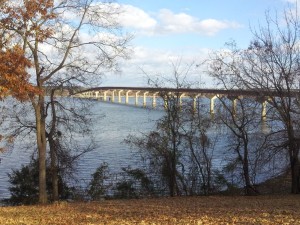 The Trace is a beautiful drive and the journey home was extra nice since I got to see most of the parts in daylight that I’d only seen in the dark on the drive down. This bridge over the Tennessee River near Tuscumbia, Alabama was especially nice to see in the light. It was somewhat scary in pitch dark on the way down but you can see it’s very sturdy here. The bridge is next to the location of Colbert Ferry which has some interesting history.
I stopped for gas outside of Nashville, next to the Loveless Cafe where I’d dined on the southbound trip, and took the time to look in the Good Sam app to find a suitable campground for the night – it was fun trying to figure out how much farther I could realistically drive and how long it would take to get there. Because the reviews were the best and the place looked small and not overly commercialized (aka I didn’t really want to park on concrete next to a 40′ RV with an HDTV), I chose Singing Hills RV Park in Cave City, KY – just north of Bowling Green.
I made it to the RV park around 8pm after speaking with one of the owners Beth to make a reservation. I was greeted by her husband Eldon and pointed to my campsite. Both of the owners were very nice in my short time there. The grounds looked great too – easy access to restrooms and showers, quiet location, a fishing pond, Wi-Fi, etc. I’ve put it on my list to check out again sometime when I have a little longer to stay and explore the area.

This trip though, I was only there for about 12 hours. I got the cats situated in the trailer. Simon really wanted to come back out though. Meanwhile I made a feeble attempt at a campfire but it was drizzling and very windy so that didn’t work out. It wasn’t necessary – just a thought of a nice fire on my last night of sabbatical. So I cooked some cajun red beans in my backpacking stove and ate that with some cheese and crackers for dinner before retiring for the night. 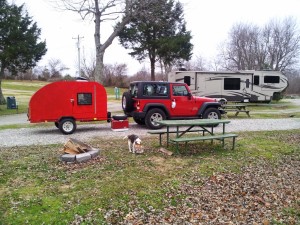 The next morning I woke up early to get on the road. Amos had some breakfast while I loaded up the Jeep with cats and secured the trailer cargo.
Then, we headed north to Ohio.

As we neared the Ohio border, I noticed some white stuff on the front of the trailer in my rearview mirror. It was sleeting and I wasn’t sure if it was ice sticking to the trailer or paint coming off. Once I had the chance to stop, I was disappointed to see that it was the latter but happy to see that the Kilz2 really didn’t get any impact at all. I shouldn’t be too upset either since the red was nearly wet when I left Louisiana. I have more and can retouch that area (and do another coat or two anyway) at home in the garage where it will have time to dry.
I pulled in my driveway around 6pm that night, unpacked the animals and my stuff and then called my friend who’d picked up my held mail to bring it over to me. I made a few brief attempts to back the trailer into the driveway but it didn’t go well. The temporary tag from the trip down expired that day, I had to go back to work the next morning and would have to take it with me.

Rolbak’s official license plate installed late on my homecoming evening.
So – the first trip was complete, the trailer was mostly complete and I was home returning to the daily grind. I have much to do on the trailer – completing the wiring and interior, rebuilding the hatch lid and finalizing the cabinetry and some exterior paint work. Overall though, I’m extremely proud of what my dad and I accomplished in just under 3 weeks and am looking forward to my trailer hobby and some amazing camping and road trips in my future.
Tags:alabamacampingfoodkentuckylouisianamississippinatchez traceroadtriprolbaksabbaticalteardrop trailer
Previous Post